We are observing fewer and fewer manatees and indications of feeding in parts of the lake where this plant proliferates.

Lake Ossa is actually a lake complex made up of three lakes: Mwembe, The "Grand lac" and Mévia. Six years ago, AMMCO had identified Mevia as the region of the lake the most populated by the manatees. In 2019, Salvinia, a plant native to Brazil, spread more aggressively in this hot-spot of manatees. This would have caused the migration of these mammals to other non-invaded areas. For example, the area of ​​Mwembe, less colonized has recently become a place where the presence of these animals is more and more felt. During the month of July, especially on July 26th and 31st, we were able to observe faeces and some opportunistic appearances of manatees. It is also possible that some manatees leave the lake to go to the Sanaga River which communicates with the lake via a small channel about 2km long.

According to the IUCN Red List 2019, these vulnerable species are threatened by hunting, bycatch and habitat degradation. Illegal hunting is the leading cause of death for African manatees. It sneakily causes the decline of the population of this species despite the legislation in place for their protection.

In Lake Ossa, the situation is very particular, hunting is no longer a great threat because through our actions of awareness and education for now a decade, in collaboration with local actors, manatee poaching has been significantly reduced. However, bycatch and the fisherman-manatee conflict persist. To this has been added the proliferation of the Salvinia plant which seems to be an even more formidable threat because of its impact on the habitat and the life of the manatees in this lake.

This water fern represents a danger to the survival of manatees because it considerably modifies their habitat. Like an army of conquerors, when this grass colonizes a space, it must be its sole master. Even native plants are no longer allowed. This is how it came into competition with Echinochloa pyramidalis (abusively called Sissongo), a plant of the Poaceae family, highly consumed by the African manatee, emblematic mammal of Lake Ossa. A situation that alters the nutrition of the latter, thus making his habitat more hostile to his development. In addition, salvinia does not seem to be consumed by the manatee. The photo above shows well the Salvinia Molesta "attaching" itself to the Echinochloa, thus preventing manatees to reach their food source. Particularly during the dry season, the Salvinia causes another inconvenience: Its massive decomposition consumes much of the oxygen present in the lake water, resulting in the asphyxiation and death of large fishes.

AMMCO conducts research to accurately determine the causes of this proliferation. The first results show a significant enrichment of water in nutrients such as nitrogen and phosphate; which are essential elements for the development of plants. AMMCO has begun a preliminary mapping of its distribution and quantification to try to estimate the percentage of coverage of the lake by the Salvinia as well as its speed of propagation, with a view to implementing eradication measures that are adequate, efficient and sustainable. Insects called "Cyrtobagous salviniae" that feed mainly on this plant will be deployed as a "biological weapon" to overcome this threat. 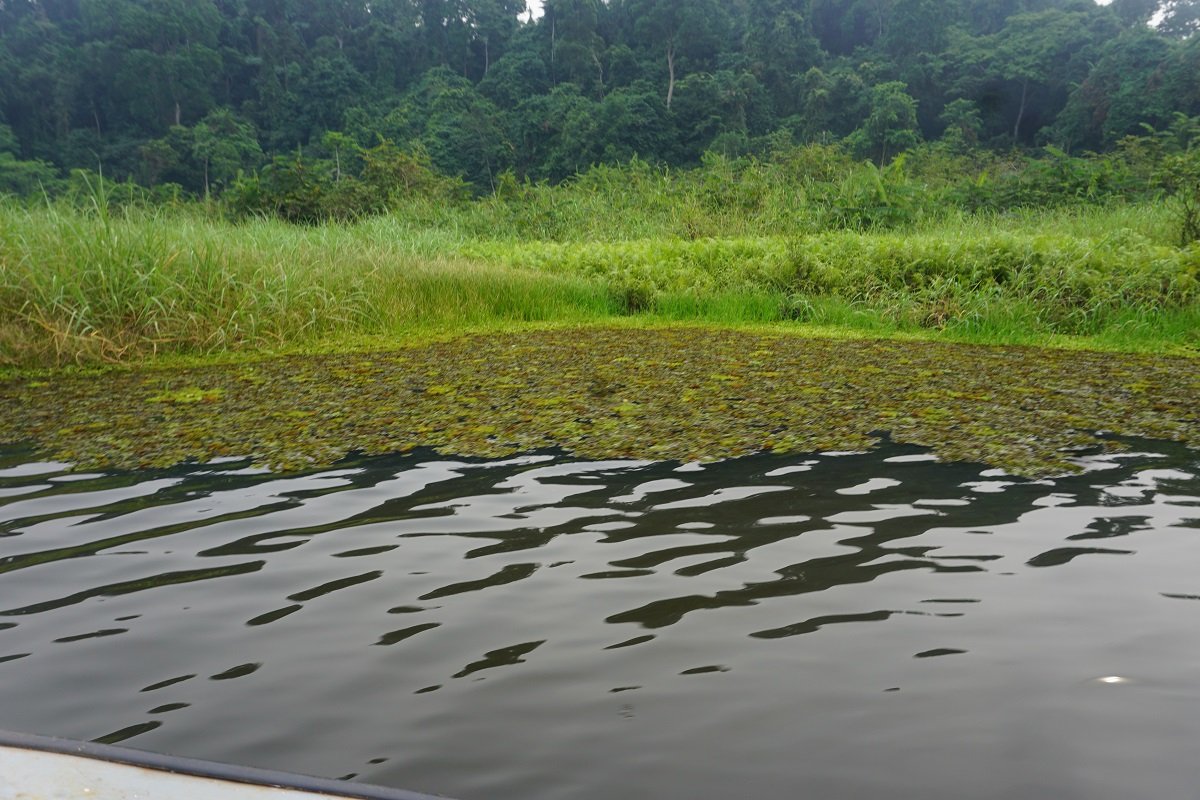